Gareth Bale netted two goals as he played a pivotal role in guiding Wales to a 4-0 win over Moldova in their World Cup qualifying opener. The Real Madrid star’s brace in Cardiff lifted him above the duo of Ivor Allchurch and Trevor Ford in the list of highest ever goalscorers for the national side, and he is now only four behind the legendary Ian Rush- Wales’ record goalscorer. 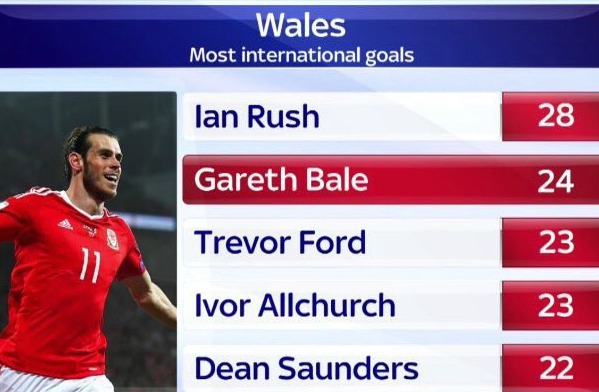 Wales were never expected to be troubled by Moldova, 154 places behind the Dragons in the world rankings, but had to wait till the 38th minute to get their account started. It came through Sam Vokes, with Bale assisting. Stoke medio Joe Allen scored Wales’ second of the game just before half time (his first ever in senior national colours) and Bale’s strike on the 50th minute took the game out of Moldova’s reach.

Wales then took their feet off the pedestal but still had time for a fourth, with Bale converting a spot kick deep into second half stoppage time to make it 4-0. A crowd of 31,731 was present at the Cardiff City stadium for this clash, a sign of the increasing popularity of the national team following their heroics at Euro 2016, where they reached the semis in their first major international tournament since 1958 before losing to Portugal.

Wales’ opening home game for 2014 World Cup qualifying was against Belgium, and only 20,156 turned up in Cardiff that evening despite the presence of arguably superior opponents.

Wales now top Group D on goal difference from Austria, who edged Georgia 2-1 in Tbilisi thanks to first half goals from Martin Hinteregger and Marc Janko. The other two teams in the group- Serbia and the Republic of Ireland, played out an entertaining 2-2 draw in Belgrade.

One of Wales or Austria are expected to top Group D and the two heavyweights will clash in Vienna next month in what promises to be a very tasty clash indeed.

Austria will be seeking redemption for a disastrous showing at Euro 2016 when they crashed out of the group stages despite being heavily tipped as one of the dark horses for the tournament.