Real Madrid’s first game of the new season took place over the weekend, and it was a limp draw against newly promoted Sporting Gijon. It wasn’t just a draw but a 0-0 one, the fifth time (including pre-season) that Real’s much vaunted attacking stars have failed to find the back of the net under their new manager. Gijon’s last La Liga campaign was back in 2011-12, and Real scored three against them both at home and away.

Bale got a central role in Real’s clash against Gijon, with Benitez shifting him to a more attacking role in order to get the best out of him. Certainly, he got more ball in comparison to last season, when his agent complained that Real weren’t giving his client enough of the football.

After an inconsistent 2014-15 season, Bale will be looking to regain his form and help Real Madrid to win their first La Liga title since 2012.The Welshman struggled to inspire last season but had some good moments against Gijon and will seek to get back to his best quickly.

Bale remains one of the best players in world football and looks much more confident in his central role behind Real’s main striker. Although Karim Benzema was ruled out of their opening fixture of the campaign, Bale appeared settled and caused a number of problems for the Sporting defence. The former Tottenham Hotspur star is an integral part of Los Blancos’ thrilling strike force and will only prosper from more touches and involvement in the centre of the field. 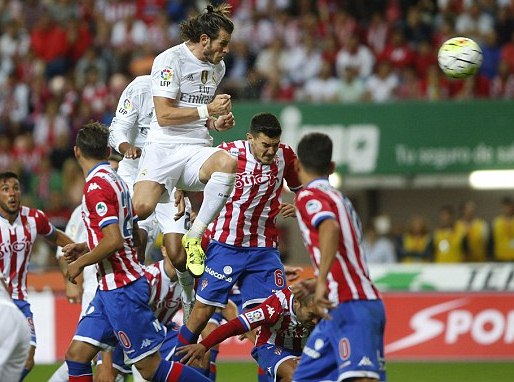 Can Bale guide Real to the title? Simply put, of course he can. After one gameweek, Los Blancos are priced at 7/4 with betfair to win the Primera Division title this season. Madrid have one of the strongest sides on the planet and, with the likes of Cristiano Ronaldo, Karim Benzema and Bale, they have the stars to cause problems for La Liga’s best defences. At the heart of their attack, Bale will be looking to win over Madrid’s hostile supporters after many were left frustrated at his performances last season.

Unfortunately for the Welsh star, he is always going to face two major problems at Madrid. Firstly, he’s the most expensive player on the planet and Real’s fans will expect brilliant performances on a weekly basis. While Bale is capable of entertaining the crowds more frequently than most, there is always pressure on him to produce moments of genius due to his extortionate price tag. Secondly is the small fact that he’s playing alongside Cristiano Ronaldo.

Real also have the likes of Jese, James and Isco jostling for starting spots, and the pressure will mount on Benitez if his misfiring forwards do not score and he cannot get the best out of Bale quickly. There are few points that Real can afford to drop in La Liga given how good Barcelona are, and a poor start could well mean curtains for their title aspirations

Bale is an outstanding talent and will come good for Real Madrid in the near future. Their supporters must remain patient with the Welshman and, with a bit of luck, he will replicate his form for the national side on a weekly basis in Spain. If he can do this, Bale will confirm his place once again as one of the best footballers in the world. It is a pivotal season for both him and Benitez.